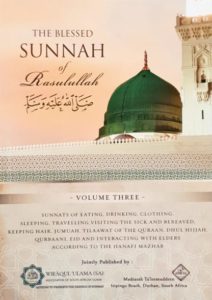 Hazrat Moulana Ashraf Ali Thanwi Rahimahullah once mentioned regarding Akbar Ali who was one of his associates: Akbar Ali was a very intelligent person. Once, while in dialogue with a Christian, he posed the following question to him, “If a person wishes to turn his entire focus towards Allah Ta’aala throughout his life, and remain engaged in ibaadah twenty-four hours of the day, in such a manner that his heart is not consumed by the world, then do you Christians have any method whereby he can acquire this?” The Christian replied, “No, there is no such method in the religion of Christianity.”
Akbar Ali then said, “However, there is such a method in the religion of Islam. Islam has shown us a complete and perfect way of life through following the mubaarak sunnah of Rasulullah Sallallaahu alayhi wa Sallam. In every department of human living, and at every occasion in a person’s life, there are certain sunnahs and etiquettes to be practiced and azkaar (duas) to be recited whereby one will be able to remember Allah Ta’aala.
“Islam has taught us that on awakening, we should recite certain duas, when sitting and waking up from a gathering, then we should recite certain duas, and likewise, when lying down to sleep, when eating and before and after relieving ourselves, then we should recite certain duas.
“In essence, there is no condition or occasion in the life of a believer for which there is no beautiful and comprehensive teaching of Shari’ah directed towards him through which he can remain perpetually engaged in the remembrance and obedience of Allah Ta’aala.”
After mentioning the above, Hazrat Moulana Ashraf Ali Thanwi Rahimahullah remarked, “Akbar Ali’s question to the Christian was quite remarkable, and in reality, only the religion of Islam has taught man a method whereby one can remain engaged in the ibaadah of Allah Ta’aala at all times.
“In essence, Islam has prescribed separate injunctions and teachings for every occasion and condition for people to remain on guidance. Hence, through practising on these sunnahs and fulfilling these various forms of ibaadah (acts of worship) at different times during the night and day and on different occasions, one will continue to find a special motivation towards the love of Allah Ta’aala, and without finding any hardship and difficulty, one will remain in the state of ibaadah.”
Alhamdulillah, with the grace and fadhl of Allah Ta’aala, we have prepared this kitaab on the mubaarak sunnah of Hazrat Rasulullah Sallallaahu alayhi wa Sallam. This is the third volume which deals with the chapters of reciting the Quraan Majeed, Dua, visiting the sick, consoling the bereaved, salaam, Jum’uah, Zul Hijjah, eating, drinking, sleeping, awakening, travelling, clothing, keeping hair, Qurbaani, Eid, interacting with elders and sitting in a Deeni discourse.