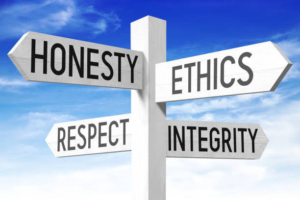 It is mentioned in the mubarak Ahaadith that on the Day of Qiyaamah, the honest businessman will be resurrected with the martyrs, while the dishonest businessman will be resurrected with the evil and sinful people. It is obvious that adopting honesty in business dealings will benefit one in his deen. However, we should understand that it will also benefit one in his dunya (worldly affairs).

In the beginning, one may experience some difficulty in business, but through maintaining honesty, one will find that Allah Ta‘ala will grant one immense barakah and blessing.

In the city of Kanpur, there was a certain person who would sell bamboo. Whenever a customer would come to him, he would clearly inform the customer saying, “This bamboo will only last you for so many days.” Hearing this, the customers would turn away and leave without buying the bamboo.

Some people advised him saying, “If you are going to tell the customers that the bamboo will only last you for so many days, they will not buy it and your bamboo will not sell.” However, he replied, “Whether my bamboo sells or does not sell, I do not mind. However, as a believer, I should ensure that I am honest in my dealings and speak the truth to the people.”

Initially, after informing the customers, they would leave him and go to another bamboo seller. This second bamboo seller would speak very highly of his bamboo and would tell the customers that it would last for a long time. Due to this, the customers would buy the bamboo from him. However, as time passed, people realized that the second seller had lied to them as their bamboo would be spoilt after just a few days from the time of purchase. They then returned to the first bamboo seller, as he was honest and his bamboo would last for the time period that he had informed them.

Hence, if a person adopts honesty in his business dealings, then even if he may experience a little difficulty at the beginning, once people see his honesty and gain confidence in him, they will continue to support him and he will not experience this difficulty thereafter.