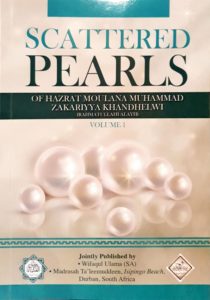 From among the giants of the recent past was Shaikhul Hadith Hazrat Moulana Muhammad Zakariyya Rahimahullah. Hazrat Shaikh Rahimahullah was a personality endowed with great qualities and sublime character. Allah Ta’aala granted him superb courage and zeal and he served the Deen of Allah Ta’aala throughout his life.

Allah Ta’aala accepted him in the service of Hadith to such anextent that his mastery and expertise in the various sciences and fields of Hadith became accepted by one and all. The title ‘Shaikhul Hadith’ became synonymous to him and this title was conferred upon him by none other than his Ustaaz, spiritual mentor and the great Muhaddith and Faqih of the age, Hazrat Moulana Khaleel
Ahmad Sahaaranpuri Rahimahullah.

He began teaching Saheeh Bukhaari at the tender age of twenty six. He authored many kitaabs in Arabic and Urdu which serve as a guidance for the Ummah towards the path of the sunnah. His works demonstrate his deep knowledge of Deen and understanding of the sunnah.